Our small team designs tailor made packages according to each traveler so you can experience Bhutan on your terms. We are dedicated and will handle to your personal requests with care and go beyond to make your holiday in Bhutan a memorable one.

Besides your tour package price, a Sustainable Development Fee (SDF) of USD 200 per night per person will be payable to the government of Bhutan. This SDF contributes to social welfare programs, conservation of the environment, and the improvement of infrastructure and facilities for tourists in Bhutan. Visitors from India are exempted from the USD tariff but will have to pay SDF of Nu. 1200 per night per person.

With an exception of visitors from India, Bangladesh, and Maldives, all other visitors traveling to Bhutan need a visa. Visas are processed through an online system by your licensed tour operator. You will need to provide a scan of your passport photo-page and a wire transfer copy of your full payment for your holiday and a visa fee of USD 40. Proof of full tour payment is needed in order to get the visa approval from the Tourism Council of Bhutan. Once your visa clearance letter is approved, a copy will be emailed to you, which you will need to show at your point of entry and the visa will be stamped into your passport.

A route permit will be processed for visitors from India, Bangladesh, and Maldives.

Getting into Bhutan by Air or Land 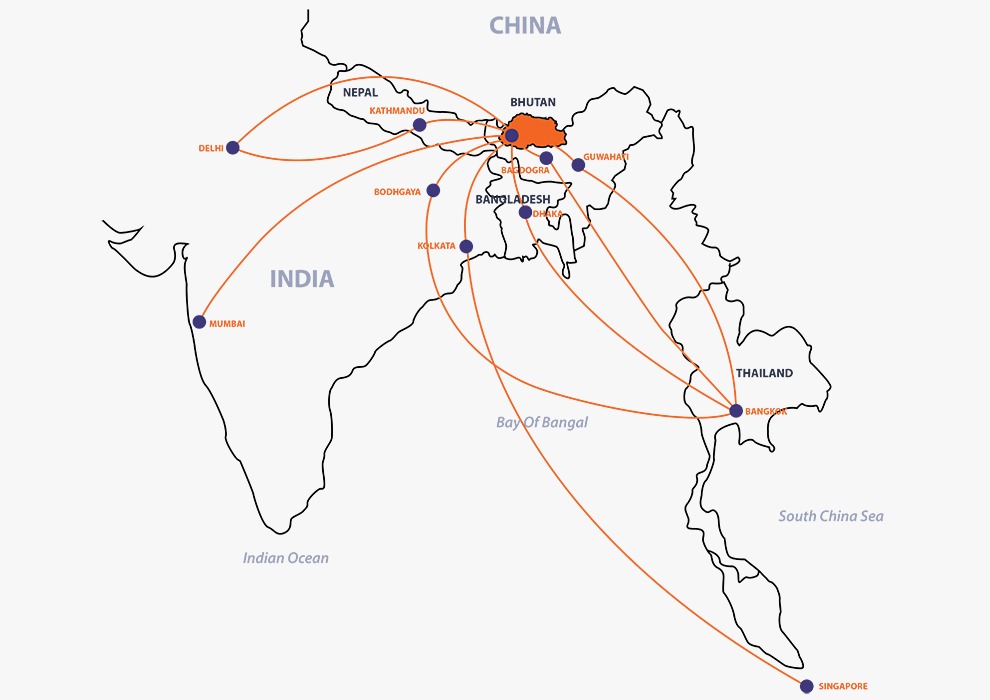 Paro International Airport (PBH) is the only international airport in Bhutan and only there are only two airlines that can fly you in; Druk Air and Bhutan Airlines. You may book your own flights online at https://www.drukair.com.bt/ or http://www.bhutanairlines.bt/ OR we can arrange to book your flights (at cost price) and add it on to your tour price; airfare is not included in your tour price.

Direct flights to Paro International Airport are available from the following destinations:

For those who prefer to enter/exit by road, the border between Bhutan and India are the only land access into entering Bhutan through Phuntsholing, Gelephu, and Samdrup Jonkar border gates.

Phuntsholing (south-west) borders the Indian district of Alipurdaur, West Bengal and driving distance from Phuntsholing to the capital city of Thimphu is approximately 146km. Gelephu (south-central) borders with Assam state in north east India and driving distance to the Thimphu is around 250kms. The third entry would be from Samdrup Jonkar (south-east), bordering with Assam state as well. Tourists entering from Samdrup Jonkar usually tour eastern Bhutan all the way to the west to the capital city and exit via Paro Airport.

We welcome all travelers, but request that you be in good health especially if your itinerary involves hiking/trekking/cycling activities. Please inform us if you have underlying health conditions/allergies that need attention so we can accordingly convey to your tour guide.

Although medicines are available at local pharmacies, it is recommended that you carry a small first aid kit from home with basic medicines that you are comfortable taking for cold, allergies, motion sickness; as roads in Bhutan are very winding.

Although Bhutan is a year round destination, it is good to consider weather conditions especially if you are planning a trek or outdoor adventures such as short hikes, motorcycling, or bicycling. Bhutan’s altitude range from alpine peaks in the north-west and subtropical valleys in the south.

Springtime (Mar-May) brings with it spring showers but wildlife and flowers are most vivid during this time. During summer monsoon season (Jun-Aug), the weather is pleasantly warm but rainfall can be expected. Skies are clearer in the fall (Sep-Nov) making it a popular time especially for trekkers. Winter months (Dec-Feb) can get quite cold however skies are clear and snowfall can be expected in Jan or Feb and there are also fewer tourists around.

If for personal reasons you have to cancel your tour after you have paid, you will receive a full refund for any
cancellation made up to 60 days before date of arrival. The effective date of cancellation will be upon our
receipt of your notification and refunds for cancellations are subject to the following per person charges:
From date of arrival Charge

Credit cards:  VISA and American Express are generally accepted at larger hotels and shops in the cities only.  Note that your credit card company may charge a foreign transaction fee (generally a percentage of the total sale).  Please note: It is common for places that accept credit cards to also charge an additional 3% bank charge.

Official Language: Dzongkha (an offshoot of Tibetan). Most Bhutanese speak English, which is taught in schools.

Note about Travel to Bhutan

Bhutan is an agrarian society where more than 90% of the local population lives on small farms and where religious practice dominates daily life.  It is also a society that mandates that for formal occasions, citizens must wear the traditional dress that has been worn for centuries.

As the country strives to balance tourism with preservation of their culture and traditions, please note the following: